“E” is the most used letter of the French alphabet. And it’s pronounced in so many different ways!

— The Extra Mile —
Experimental French writer Georges Perec published in 1969 La Disparition, a novel with no “e” at all. Later on, he published its counterpart Les Revenentes : a novel where “e” is the only vowel!

So many e/è/é sounds! Many are not even written with an “e,” because these sounds can have different spellings.

And we also have a lot of silent “e” in French, but that’s easy to pronounce: 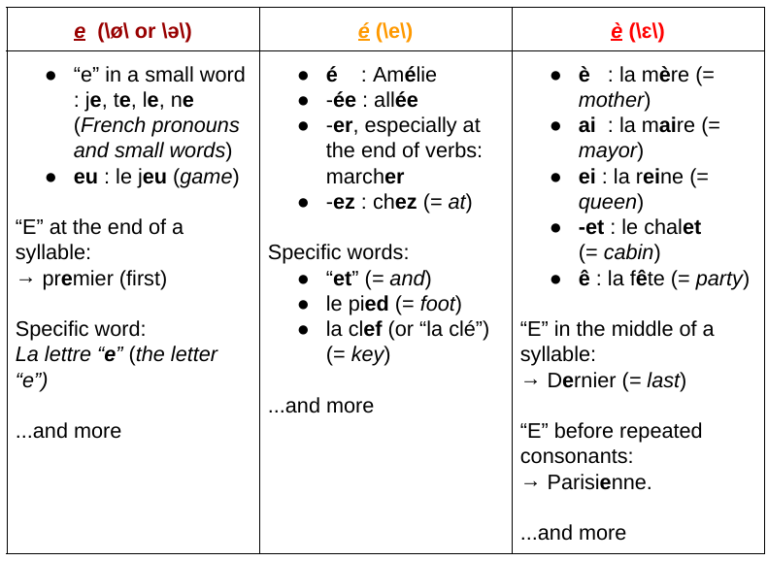 Repeat these sentences. The “è” sounds are underlined. It’s more open than “é.”

That’s the catch with French pronunciation. Depending on your accent, the place you were raised in, the sentence, and your personality, some “é” sounds can become “è” – and some silent “e” can become “uh”.

However, most words still only have one pronunciation. We do say boulanger with an “é” and boulangères with an “è”, and the rules in the Recap table above mostly hold true for all longer words.

At least in the real everyday modern French I hear in France!

Finally, the “e” by itself can also be pronounced “uh”. Like in the very common filler word “Euh” ! Your mouth is mostly closed when you say it.
There are actually two ways of saying it, between \ø\ (as in “Euh…”) and \ə\ (the “schwa sound”, like the “a” in “Tina”). But the difference is so slight that you shouldn’t bother.

Are you now comfortable with these three pronunciations?

Here are two sentences you can practice to make sure you get it. To help and challenge you, only the “è” sounds are underlined! How can you pronounce them?

(Watch the video lesson above to check your pronunciation.)

Congratulations ! Now you can pronounce three sounds of “e” like in everyday modern French 🎉🎉🎉

I’ll see you next week for Part 2 of 4 of this series on French Pronunciation Fundamentals. We’ll talk about nasal sounds!

Learn more, dive deeper, click on the link to these other lessons:

À tout de suite.
I’ll see you in the next video!

→ If you enjoyed this lesson (and/or learned something new) – why not share this lesson with a francophile friend? You can talk about it afterwards! You’ll learn much more if you have social support from your friends 🙂

→ Double your Frenchness! Get my 10-day “Everyday French Crash Course” and learn more spoken French for free. Students love it! Start now and you’ll get Lesson 01 right in your inbox, straight away.